You might forget your wallet or purse but will “Never Leave Phone at Home” Chris Norton, AT&T

Are you a Mobile APP military person > Veteran, spouse, active, reserve, guard or family member? This weekend is the first AT&T Mobile APP “Hackathon” for Veterans and they are going to build mobile applications for just the military community! All within in 24 hours. Ready, set, go at veteran-themed mobile app development contest, or hackathon.

I spoke with Chris Norton, Senior Program Manager, Military Talent Attraction (and a US Army Reserve Major) and Alex Donn, senior marketing manager for the AT&T Developer Program and the mastermind behind AT&T’s hackathon program. Chris was excited and thrilled about the event and the focus it provides on the military community.  He also is a great avenue to job search resources (read on below).

Speakers; veterans with ideas; business developers; coding specialists; investors roaming the crowd > sounds like a great place to be and if you are close to NYC they would love to see you (it is free for veterans). But this is about more than just being there, it is about the excitement of a major corporation providing resources for YOU, the military community. Follow the Twitter hashmark #ATTHack and Alex is @Alex_Donn for updates on the progress of the hackathon.  You have an idea for an App that you want to share with attendees?  Post on twitter with #ATTHack or leave comments on this blog!

They have a very broad net of military folks but most attendees will be veteran students in the three state area around New York City. According to Alex, the hackathon will build the synergy and fertile ground needed to make mobile applications that help the military community.  Our very mobile and on the go lifestyle is challenging and the Apps will focus on assisting you. I asked what resources (such as MilitaryAvenue.com) the Apps would pull from and they were leaving that open for attendees. So if you like MilitaryAvenue as a resource send Alex a quick tweet.

Job hunting? Many veterans are; and if you have read this far, you just found a great resource! Direct to the Twitter account of the Military Talent Attraction Program Manager at AT&T @chrisnorton37 Chris is a great guy and offered to open the door to his twitter account to help you! Why not send a tweet and make contact today?  He knows a lot more than AT&T too.

He was attending the Quarterly 100,000 Jobs Mission meeting before he took my call! This effort started with 11 companies and has now grown to 108 who are actively seeking veterans to employ! As of March 31st 64,628 veterans have been hired through this program and their goal is 100,000 by 2020. Time to reset goal! You can find them at the Veteran Talent Exchange.

What a great interview!  Thank you Chris and Alex for taking the time to talk to MilitaryAvenue about the Hackathon and Veteran Employment! 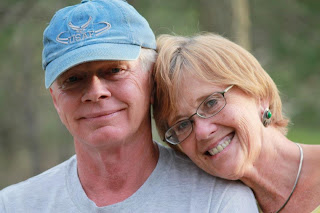 Col K and Deb, his fantastic military spouse!Col K is a retired Air Force pilot who served with the best of the military community from the Army, Navy, Marines, Coast Guard and Air Force. He flew combat rescue and special operations helicopters, fixed wing trainers and airlift and retired while flying the C-17 as the Vice Wing Commander of the 62nd Airlift Wing at McChord AFB. He enjoys writing about military issues and is a frequent contributor to the the DoD Blogger Roundtable at DoDLive. A member of a proud military family that created MilitaryAvenue.com to support the troops and their families, he enjoys the continued military ties from blogging.